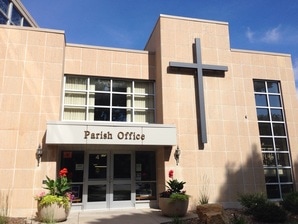 Our Heritage
From a small Irish community, St. John the Baptist has become an integral part of Mankato in the 130 years of existence.

From 1856, four years after Mankato’s founding, until 1884, Catholics were served by Ss. Peter and Paul’s Church, of German national heritage. In 1884 Bishop Grace established a second parish and assigned Fr. John Prior as pastor to what would be known as St. John the Baptist Parish. Fr. Prior celebrated the first Mass on Sunday, August 2, 1885, in the new church located at South Broad and Hickory Streets.

Fr. Prior was succeeded by Fr. Daniel Hughes. Fr. Hughes priority was to pay off the heavy debt existing on the church. One method of accomplishing this was annual “pew rent” which ranged from $7.50 to $20. The mortgage was paid on September 28, 1901.

Fr. Dan Hughes was replaced by his brother, Fr. Robert Hughes on Sunday, October 6, 1901. During the time Fr. Robert was pastor the church roof was shingled, a steeple erected and the lighting converted from gas to electricity. A Way of the Cross was dedicated in memory of Fr. Dan Hughes who died in October 1909.

In 1922-23 a brick parish house was built, a side chapel and vestry added to the church and the sanctuary enlarged and redecorated. In November, 1925, Fr. Robert retired due to ill health. Succeeding him was Msgr. Dominic Mangan who served for 22 years, until his death in 1947.

In spite of the handicaps of the Depression and World War II, Msgr. Mangan met the challenges and the parish’s wishes for its own school by purchasing the former George Palmer property. This housed the School Sisters of Notre Dame and the school provided space for eight grades in four classrooms.

Msgr. Mangan’s successor was Msgr. Philip Matthews. His motivation resulted in a new school gymnasium in 1951. A new parish church was built in 1961. Msgr. Matthews was relieved of the heavy duties of a large parish in 1970 and died in 1985.

Fr. Joseph Cashman came to St. John’s in 1977 and refurbished the church’s physical assets and the grounds. Fr. Francis Kunz was assigned to St. John’s on July 2, 1985. He has continued the programs in the parish and saw the RENEW process to its completion.

Fr. Richard Colletti became pastor in 1996 and served until 2008. The physical changes were the addition of an elevator and the purchase of the former St. John’s school building and Palmer house. The Palmer house serves as the parish rectory since the former rectory was transformed into office space. St. John’s became alive and active with many ministries and youth groups. Stewardship of time, talent and treasure was implemented and is a way of life for parishioners of St. John’s. St. John’s was blessed with an  Adoration Chapel on the Feast of the Ephihany, January 6, 2002.

Fr. John Kunz arrived in 2008, the nephew of Fr. Francis Kunz. The $2.5 million renovation of the church and Matthews Hall was a 3 year process. The new lighting and narthex are a welcoming invitation to all. The parish has grown to 1300 families and has developed many ministries and services. Simon Ministry opens our doors each week to the poor and homeless.

Today, St. John the Baptist Parish has growing membership of 1300 families. We have 189 students enrolled in the Loyola Catholic School system and over 400 children enrolled in our parish Faith Formation program. We have many ministries and organizations that are evidence of our continued growth and commitment to providing a spiritual home for our members and a setting in which to give honor and glory to God.